Tech giants Apple and IBM have teamed up with Japan Post for an ambitious initiative aimed at connecting Japanese seniors with their families through a special custom-made iPad software. The project will engage iPad apps developed and powered by IBM and integrated into the existing services of Japan Post, helping seniors improve their quality of life.

Initiative to Improve Lives Of Seniors in Japan

Seniors currently make up nearly 33 million people equivalent to 25 percent of Japan’s population, and this number is expected to rise to 40% over the next 40 years. The three companies have teamed up to improve the lives of millions of seniors and is part of a large-scale effort to keep elderly citizens in all parts of the world healthy and enable them remain in their homes as long as possible.

The iPads will enable elderly citizens to stay in touch with their families and friends and coordinate a variety of activities such as monitor their health, connect to care giving services, and remind them of doctors’ appointments, medications, exercise and diet, as well as access home handyman services. Japan Post is a government-owned life insurance, banking, and the largest postal delivery service in Japan, and also handles several essential care giving services for seniors.

The new apps will also incorporate existing Apple services like FaceTime. According to Apple, iPad is the top-selling tablet in Japan, and Japan Post will deliver the special tablets to seniors and help them set-up and learn to use the tablets. In addition, Japan Post will also provide a monthly check-in service for an extra fee. The aim of this initiative is to give iPads to between 4 and 5 million senior citizens by 2020 and ensure that they can effectively use the IBM-developed apps on the devices. 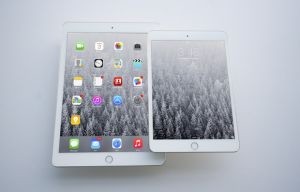 The new apps use a machine-learning computer system to learn and adapt to the ways seniors communicate and use them. These apps have a simple interface with large and easy to read buttons that have adjustable settings to help vision and hearing impaired users navigate through. These apps by IBM are developed on top of Apple’s already existing and accessible features such as dictation, large text type, closed captioning, and Siri which will read websites and emails, making the devices more empowering. These tablets have over 100 pre-installed enterprise apps backed by IBM’s expert analytics and big data as well as design chops and user experience by Apple.

The program is an extension of Apple and IBM’s year old partnership to produce business-oriented iPad apps pitched at telecoms, healthcare, banks, insurance, and utilities. The two companies have already spanned 22 apps for 11 industries, but the new project with Japan Post seems to be the most ambitious; integrating with a company with a national scale targeting a uniquely challenging audience. The project has a potential for global impact as many countries face the challenges of supporting senior citizens, and the long-term plan is to address the issues of elder-care at a global level.

When Will It Come Together

The three companies have not revealed a timeline for additional apps and features or what the seniors will pay for the iPads and included services but according to Forbes, the Japanese elder citizens will not have to pay for the iPads although there might be some fee associated with the project. Apple has always wanted to help people who are marginalized in a way, improve their lives, and empower them to do things other people can do, and this project is a great milestone towards achieving that.