The 4th of July is the celebration of American independence from England. It is also known as Independence Day. The tradition of celebrating this day goes back to the 18th century and the American Revolution itself. Officially, it has been a federally recognized holiday since 1941. Understanding its history means taking a step back in time.

The History of July 4th

In 1776, in the month of June, representatives from the 13 American colonies worked to create a statement and formulate a resolution that would declare the colonies independent from Great Britain. Over the next month, the men met to discuss what this would mean and the ramifications it would create. On July 2, 1776, the Continental Congress, a grouping of these men came together. They voted and agreed that they would seek independence from English rule. On July 4th, 1776, the Continental Congress adopted the Declaration of Independence, a document that outlined the rights of the colonies and their move to free themselves from English rule. The document, created by Thomas Jefferson laid the groundwork for what the U.S. Constitution would be.

Who Was the Continental Congress?

To understand the importance of July 4th as well as the Declaration of Independence, it is important to understand who the Continental Congress was. This group of men came together during the Revolutionary War, which began in April of 1775. At this time, a handful of colonists believed that English rule was devastating the colonies and taxation was making it impossible for them to live. At this time, independence was thought to be a radical, unlikely move with the revolution aiming to make Great Britain reduce taxation and improve the lives of colonists.

However, by the next year, it was clear that independence was truly the necessary move for the colonists. At this time, Thomas Paine wrote, “Common Sense,” a document that was published in 1776 that showcased the increasing sentiment towards the English rule. That pamphlet educated more people about why independence was necessary and, by the middle of the year, this once radical movement became necessary. On June 7th, the Continental Congress came together. It was a group of men that included John Adams, Thomas Jefferson, Benjamin Franklin, Roger Sherman, and many others who are considered founding fathers of the United States. 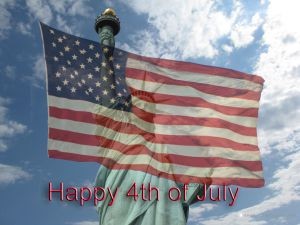 What many people don’t know is that, prior to this, colonists celebrated with bells, bonfires and processions in honor of the king. In 1776, this no longer seemed ideal. Rather, they held mock funerals for King George III, the ruler at the time, as a way to showcase the break from the country’s ruling. The first celebration of the Fourth of July occurred in 1777 in Philadelphia and this would continue year after year. In 1778, George Washington issued double rations of rum as a celebration on this date. In 1781, Massachusetts became the first state to make the day an official holiday.

Since this time, celebrations of the Fourth of July have included fireworks, patriotic music, and plenty of pride in the country.