The military start of the American Revolutionary War and start of the Independence of America occurred in 1775. But the political scheme of things, which led to the military upheaval, began in 1765 and ended in 1783 when the United States of America was formally founded. The determination for complete independence occurred when the rebel colonists of 13 American colonies were ready to overthrow Great Britain’s authority.

Rebel colonists, or patriots, completely rejected British monarchy and the authority of the aristocratic British Parliament to tax and collect. Rebellion began with protests, which later escalated to all-out war. But before war, this escalation had led to the Boston Tea Party of 1773, in which the patriots had rebelled by destroying a consignment of newly taxed English tea.

The British, or colonists, responded to this rebellion with the Coercive Acts of 1774; newly imposed punitive laws on the state of Massachusetts. In 1774, the patriots established their own government, which aided in the resistance against Britain.

The 1775 Battles of Lexington and Concord

On April 18, 1775, 700 British soldiers were sent to Concord under the direct order of General Thomas Gage, Massachusetts’ British governor, to destroy the patriot’s military supplies and to capture patriot leaders John Hancock and Samuel Adams. The instructions for this order were formally given to the British Governor by England.

However, the Boston patriots had been made aware of this plan and were more than ready for the British. They roused their militiamen and set out to quickly warn Adams and Hancock. Revere, Adams, and Hancock were already in Philadelphia by the time the British arrived to Lexington.

Before arriving at Concord, British soldiers faced 77 armed patriots under the direct order of patriot leader, Captain John Parker, on the common green of Lexington at 5am. While the patriots were clearly outnumbered, they began to disburse in defeat until “the shot heard around the world” was fired. This brief battle led to the death of 8 Americans and 1 British soldier. It also led to the start of the American Revolution.

By the time the colonists reached Concord at 7am, they were faced with hundreds of armed patriots. The British had managed to destroy the Americans’ military supplies but quickly retreated to Boston under the command and order of colonist Lieutenant Colonel Frances Smith. The British soldiers did not make it to Boston fast enough, because in the end, they suffered 300 casualties, while the patriots suffered less than 100 casualties.

The 1775 Invasion of Canada 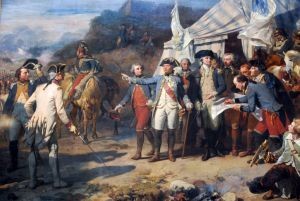 On June 14, 1775, the Continental Army was formed and established following the start of the American Revolution (read the American Revolution timeline here). This army was formed by all of the existing colonies who would later form the United States of America. The direct goal of the army was to coordinate all of the colonies’ military efforts during the revolution.

The 1775 Invasion of Canada was the newly formed military group’s first official and major military initiative. The army’s objective was to gain control of the British controlled, Province of Quebec while attempting to convince French-speaking Canadians to join their side against the colonists.

Both forces later met up at Quebec City, but were defeated during the December 1775 Battle of Quebec. Before arriving to Quebec City, both groups had faced difficulties which likely added to their defeat. The Fort Ticonderoga group had been reduced in size while the Cambridge Massachusetts group suffered from hunger and lacked necessary equipment and supplies.

Additionally, the assault occurred during a blizzard on the final day of December. The ominous decision to attempt an assault on December 31 was made by Colonel Benedict Arnold in a desperate measure to attack the opposition before the enlistment expiration of many of his men on January 1st.

Dozens were killed in the Battle of Quebec, including General Montgomery. Following the retreat from Canada, Arnold made the notoriously known decision to switch sides, joining forces with the British.