Over the years, the film that has dominated the theaters for years remains the “The Sound of Music“. It has been the most watched film of all time. With the dollar being faced with ups and downs of inflation, the Oscar-winning movie retains the position of the third-highest grossing movie in history, at the heels of “Star Wars” and “Gone with the Wind”. Initially, “The Sound of Music” was based on the book “The Story of the Trapp Family Singers,” authored by heroine Maria von Trapp written in the year 1949. When the story got into the hands of the Hollywood producers, they took some liberty and twisted the true story of the von Trapp family, including the following ways.

Changes From The Original Lifestory To Hollywood

The eldest von Trapp child was Rupert and not Liesl. Rupert was born in 1911 and was a practicing physician when the family was flying to Austria in the year 1938. The film practically changed all the names of the children of von Trapp. When the film “The Sound of Music” premiered about 50 years ago precisely on Mar. 2, 1965, the world learned the story of a nun, Maria (a would-be), who was sent to work for an Austrian naval captain with seven children as a governess by her superiors. But the truth and some details about her still differed by far. The von Trapp and Maria family were real people, but the film lost some crucial elements that suggested that the characters were fictional.

Maria was a tutor to one child of von Trapp, not a governess to them all

In 1926, Maria, the Trapp’s second-oldest daughter contracted the scarlet fever – a disease that had killed Trapp’s first wife some four years earlier – and was unable to walk to school a distance of about four miles. The naval captain visited a Nonnberg Abbey in the Salzburg looking for a tutor for his daughter. The 21-year-old Maria was selected for what was intended to be a 10-month period of responsibility before she formally joined the convent. As a novice convent in Salzburg, Maria Augusta started getting “serious headaches,” and her superiors opted giving her a vacation helping care for the seven kids of the widowed Baron. Maria then married the Baron and bore him three children. 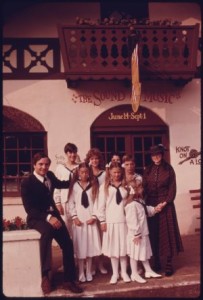 Like any other real family, the family of von Trapps got broke when they lost their livelihood when their bank sunk under in the 1930s during the Great Depression. As a means of raising funds, the von Trapp’s family took in boarders who included Father Franz Wasner. The Father recognized their talent in music as he heard them sing. The priest molded the von Trapp’s family into professional singers as he posed as the family’s musical director. According to Santopietro, Maria von Trapp once claimed that the priest, slowly but surely crafted them into a real musical entity. After they had fled from Austria with the von Trapps, the priest toured with them via the United States and Europe. Santopietro called Father Wasner the driving force behind musical the Trapp Family Singers, but he acknowledges that the director of the film thought that the presence of the musical tutor, Wasner’s would undercut the role of Maria, so Father Franz Wasner was replaced by Max Detweiler, a fictional music impresario.