Originally known as “Decoration Day,” Memorial Day was a response to the extensive damage of the Civil War. Approximately 620,000 soldiers died on both sides during the Civil War and in fact, Congress passed an actual law in 2000 that requires all Americans to stop what they’re doing at 3p.m. on Memorial Day to honor those who have died in the US.

General John A. Logan is considered the holiday’s unofficial “Founder.” It is widely believed that Logan originally chose May 30th because it was a rare day that didn’t fall on the anniversary of a Civil War battle. Some skeptics debate that it was only chosen because flowers would be in full bloom around the country. However, due to the Uniform Monday Holiday Act (which took effect in 1971) it was moved to the last Monday of May to guarantee long weekends.

Recently freed slaves were among the first to spontaneously commemorate the US fallen heroes. Three weeks after the Confederate surrender a procession entered a Charleston, South Carolina camp where such poor conditions had led to over 250 prisoners dying from exposure or illness. On May 1st, 1865 over 1,000 freed slaves with regimens of colored US troops with a small number of white Charlestonians gathered to consecrate a proper burial site for the Union dead. They sang hymns and gave readings to honor the dead.

In World War I “Decoration Day,” as it was known then, had only been used to commemorate the Civil War. It was expanded to be inclusive of all men and women killed in all wars and became widely known as Memorial Day in the 1970’s when the US was deep into the Vietnam War. In the first year 27 states held a ceremony and by 1890 every former state of the Union had taken it on as an official holiday. Memorial Day became a federal holiday in 1971. Some southern states celebrate Confederate Memorial Day on different days throughout spring. New York was the first state to officially recognize Memorial Day. The official origin of Memorial Day was declared in 1966 when the Congress and President Lyndon Johnson declared Waterloo, N.Y. the “birthplace.”

The poppy originated from John McCrae’s 1915 poem In Flanders Fields. The tradition of wearing poppies was started by a Georgia teacher and volunteer Moina Michael. She campaigned to make the poppy a symbol of tribute to veterans. Poppy sales support the work of the Veterans of Foreign Wars.

It is custom to place small American flags on each grave, a tradition that was started on the first Memorial Day observance, and is still followed in cemeteries around the US today. 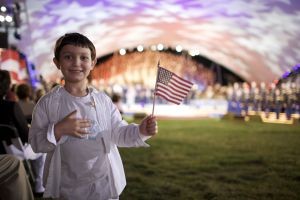 “Taps” originated from Brig. Gen. Daniel Butterfield. The story goes that he summoned his brigade bugler Pvt. Oliver Wilcox Norton due to his extreme dislike for the bland “extinguish lights” call that was common during the time. He then whistled a new tune and thus began the creation of the most commonly played song during ceremonies on Memorial Day.

In 2012 the American Automobile Association projected that 34.8 million Americans would travel 50 miles or more for Memorial Day, showing that over 150 years later our pride for our veterans holds strong and the spirit of the holiday will be carried as a reminder for many generations to come.