The First World War claimed almost 17 million lives, affected generations and turned the world’s political order. Although the origins of the war are at times unclear, here are five things that happened in the war that are clear and well documented.

From The Beginning To The End Of The World War 1

The First Battle at Ypres occurred October 19 – November 22, 1914, after Germany invaded Belgium. Author Frank H. Simonds describes the atrocities committed against the neutral Belgians in his 1918 “History of the World War.” The press reported atrocities such as “cities burned, women and children murdered, women outraged, civilians executed.” Further atrocities outraged the world. German troops returning from a battle were mistaken for enemy troops by other Germans and executed. The prevailing unit falsely reported that Belgians killed the other Germans, resulting in a mass slaughter at Louvain. Simonds wrote, “Women were turned over to soldiers to wreak their will… children were slain, old men and young massacred” and the town set in flames.

One dead German soldier’s diary revealed, “Our soldiers are so excited, we are like wild beasts. Private Max Thomas further wrote that he and his men “bayoneted two men with their wives and a girl of eighteen.” Future Ypres battles were the scene of some of the bloodiest WWI battles.

2. First Use Of Poison Gas By Germany

During the Second Battle of Ypres, Germans first used large amounts of poison gas. It’s recorded that more than 150 tons of chlorine gas fired at two French colonial troops “devastated the Allied line.” In 1917, Germans introduced mustard gas into WWI. The Allies began using gas masks and The United States, which entered WWI in 1917, fired poisonous gas at the Germans in 1918.

3. The British effect on Germany at sea

The U.K. History Learning Site describes the Battle of Jutland as “the only major naval battle of World War One.” German Admiral Reinhardt von Scheer challenged the British Royal Navy blockades, ordering ships to move along the Danish coast. Admiral Jellicoe responded and the Battle of Jutland commenced on May 31, 1916. The Germans sank three British ships but Jellicoe’s forces, joined with those of Sir David Beatty, sank one German ship and damaged two others. History Learning Site points out, “the German fleet was never again to be in a position to put to sea and challenge the British Navy in the North Sea.”

4. The Commission for Relief in Belgium

The Commission for Relief in Belgium fed and clothed nearly 11 million people from Belgium and Northern France for much of WWI. President Herbert Hoover chaired the effort with the food and supplies getting in to the German-occupied areas by American military volunteers. The cotton flour and sugar sacks were even used to make clothing and decorated functional items. Read more about this here.

When The End Was In Sight 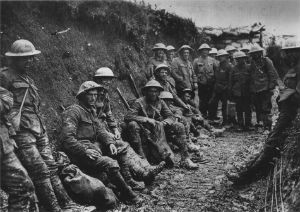 5. The End was not the official end

After the United States entered WWI, the tide eventually turned for the Allies, even though the U.S. lost over 116,000 troops. Gains during the Second Battle of the Marne resulted in the Allies reclaiming portions of Belgium and France. However, WWI did not magically end with the end of fighting on November 11, 1918.WWI ended with the formulation of the Treaty of Versailles and League of Nations, according to the U.S. Department of State.