Marie Antoinette is undoubtedly one of the most talked about women in history. Untangling facts from rumors reveals intriguing facts that we may not know about Marie Antoinette.

Marie Antoinette’s parents, Holy Roman Emperor Francis I and Hapsburg Empress Maria Theresa and Louis XV, grandfather to the future king of France, arranged the marriage of the 14-year-old Austrian Archduchess to Dauphin Louis Auguste, 15 year-old heir-to-the throne of France. The purpose was to “cement the new alliance with France“. The teens met for the first time the evening before their marriage.

Marie Antoinette and Louis XVI did not consummate the marriage for seven years, leading to gossip because there was no new male heir born. When daughter Marie Therese Charlotte was born, new rumors centered on speculation that another man fathered the child. Rumors centered around the queen allegedly having multiple affairs, leading to questions surrounding the fatherhood of all four children born to Marie Antoinette and Louis XVI, even after two of their children died early in life.

The History Channel explains that Marie Antoinette “captivated the French public in her early years in the country.” Admiration turned to disdain as royalty enjoyed benefits such as paying no taxes while ordinary citizens paid high taxes and suffered from worsening economic conditions.

As her reputation for extravagance grew, so did resentment over Marie Antoinette’s hairstyles, featuring adornment of feathers and other elaborate decorations. PBS refers to one such controversial hairstyle as the “Belle Poule,” featuring a model of a French naval vessel of the same name, known for sinking a British frigate. Marie Antoinette’s private hairdresser complied with the queen’s desires to style her hair to heights rising up to four feet above the top of her head. Her elaborate hairstyles caused ire among ordinary people already dismayed over the queen’s spending.

In the midst of starvation and high prices for basic items such as bread, French citizens became outraged upon learning about a great banquet for the royal guards that was held at Versailles and rumors of “orgies”. A mob of women, some brandishing knives, marched in pouring rain to Versailles to demand bread from King Louis XVI. After discovering an unguarded entrance the women marched to the queen’s quarters, killing two guards as the king and queen narrowly escaped. The king and queen returned to Paris with the mob. After unsuccessful escape attempts, the king and queen eventually met their fate at the guillotine. 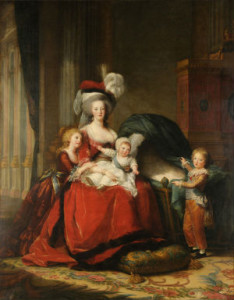 A group of American Revolution veterans laid claim to the first permanent settlement of the Northwest Territory. The veterans named Marietta Ohio after Marie Antoinette and sent notice to the queen of their gesture to honor the contribution of the French in aiding the colonists fight against the British.

In spite of living a very public, lavish lifestyle, Marie Antoinette was embarrassed by some public royal rituals. She once complained to her mother, about putting on her rouge and washing her hands in front of the whole world. She also vowed to never again undergo the traditional public exhibition provided to aristocrats and members of the court who stood in attendance to witness the birth of royal offspring.