According to the Great Outdoor Recreation Pages (GORP), there are hundreds of caves in America that have been developed into “show caves,” with passageways and lighting that allow comfortable exploration for people of all ages and abilities. click here for full article. Out of the hundreds here are five that make up part of the spectacular American caves out there.

While most caves are created over time by water carving passages through rock, Washington’s Ape Cave is a lava tube that was created when Mount St. Helens erupted nearly 2,000 years ago. When a volcano erupts, channels of smooth-flowing lava may crust over to form lave tubes. When the eruption ends or the lava flow is diverted, the molten rock recedes and the lava eventually erodes downward, leaving a hollow tunnel through the rock. At 2 ½ miles long, Ape Cave is the longest lava tube in the Western Hemisphere. 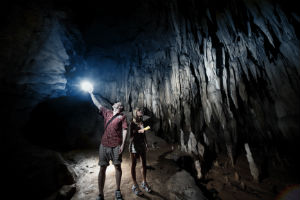 Carlsbad Cavern is over 1,000 feet deep and is approximately 30 miles long. Visitors can enter and exit the cave’s Big Room either by way of high-speed elevators, or by following a steep, 750 foot winding path. This 250 million year old cave features a reef that resulted from the marine-life remains of an ancient inland sea. Recreation.gov says that beneath Carlsbad Caverns National Park, lies an underground treasure including more than 117 known caves.

Jewel Cave is the world’s third-longest cave and is the second longest cave in the United States. Visitors are able to witness an intricate cave system with a variety of unique rock formations. A wide range of tours are available, from light, scenic walks to more strenuous tours.

Niagara Cave is named for its beautiful, 60 foot underground waterfall. It is one of the Midwest’s largest caverns. Visitors have the opportunity to see the caves notable stalactite formations, calcite flowstone and fossils that dated over 400 million years.

Mammoth Cave is the world’s largest cave system, measuring 350 miles long and nearly 380 feet deep. The cave has a rich history; it was home to some of the world’s oldest human artifacts, had been used as a tuberculosis colony and was used to hide black slaves seeking freedom in the North via the Underground Railroad. Mammoth Cave houses more than 50 species of cave animals. In 1941, it was designated a national park to ensure the protection of its historically valuable artifacts and ecosystem.