Greece is a country in southeastern Europe. Throughout ancient times it was simply referred to as Hellas. About 10 million people currently reside in Greece. The capital of Greece is Athens; it’s also the largest city in the country. Thessaloniki is the second largest city in the country. Many consider Thessaloniki as the “second city” and it’s commonly mentioned as the co-capital to Greece. Greece is located at the intersections between Asia, Europe, and Africa. Located on the southern tip of the Balkan Peninsula, Greece has land borders with Turkey to the northeast, Bulgaria and Macedonia to the north, and Albania to the northwest.

The country has nine different geographic regions Thrace, Crete, Ionian Islands, Peloponnese, Epirus, Aegean Islands, Central Greece, and Macedonia. The longest coastline on the Mediterranean Basin belongs to Greece; overall Greece has the 11th longest coastline in the world. About eighty percent of Greece is covered in highlands. Mount Olympus is the highest peak at 9570 feet. Greece is one of the founding members of the United Nations. It’s a country that preaches democracy and a well-developed nation with an advanced high income economy. Quality of life and a very high standard of living are top priorities for the Greek people. In 2001 Greece joined the Eurozone. Greece has one of the largest economies in the Balkans peninsula. It’s one of the largest shipping powers in the world due to its service sector and industry. Shipping and tourism are two of Greece’s biggest industries. 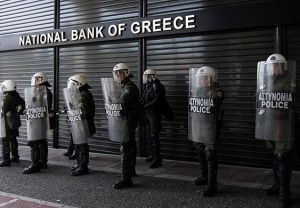 Greece is an important regional investor to the Balkans peninsula. Greece’s nominal gross domestic product is 238 billion and its purchasing power parity product is 284 billion. That ranks 43rd and 51st in the world respectively. Among European nations Greece is the 13th largest in the European Union. Currently things have taken a toll for the worse. Greece is facing one of the biggest economic crises in the country’s history. Greek banks have been closed since June 29th 2015 (read more about bank closures here); it has turned the country into a colossal turmoil. There is no word out on how long these banks will be closed and the government has stated that it would not reopen them because of a conceivably devastating run on deposits. Bank withdraws have been limited by the government and most citizens simply can’t “get by” with how the ongoing economic crises has shaped up the country. Big and small businesses are losing clients at an alarming rate. There is no indication right now that Greece will get their euro back, and that could be a devastating blow, one in which the country might never recover from.

When Greece joined the Euro Union in 2001, the economy flourished and went on to have one of the most successful growth periods in the nation’s existence. Unfortunately, after the 2008 recession, all Europeans countries entered a financial crisis, but Greece has had it the worst. Its debt and overall resources to come out on top of its recession has been nonexistent. By 2013 the unemployment rate reached a staggering 28 percent. At the moment the economic prospects for Greece are not looking great with tourism set to drop, food and hospital medication shortages looming, the debt burden will remain very high, and fiscal sustainability will require continued restraint for some time.