The stability of the European markets remains shaky at best. As the Greek crisis looms, the business world and financial experts hang on every word in hopes of hearing words of encouragement. A positive end to a dark and dreary period in the history of Greece tilts the scales in all directions from day to day.

What If There Was A Grexit?

The European Central Bank is sending a strong message to Greece with the freeze of their lines of liquidity. Without access to cash, the banks in Greece have been forced to close their doors and the citizens are left without access to what little funds they do have. While Greek citizens continue to hold demonstrations urging their government to not agree to any financial deals, their arguments fall on both sides of the financial fence.

The current market conditions around the world are rising and falling in sharp numbers and should the votes come in at an astounding “No”, the stock markets will no doubt open to baffled and confused analyst and advisors. Both parties will try and come to terms as to why a country would devalue themselves to such a low just to prove a point of what they consider their freedoms.

Without Greece in the eurozone, the remaining countries may believe they are better off without the worries, but to the financial world the confidence in their currency may take years or generations to recover. There is a potential danger that a Greek departure from the euro might do wider economic damage, but the risk is generally thought to have reduced since 2012, the last time such speculation was rife. However, the outlook in other struggling eurozone countries may not be so great, as nervous depositors in countries like Spain or Italy may also move their money to the safety of a German bank account, sparking a banking crisis in southern Europe. Furthermore, confidence in other banks such as the French banks, that have lent heavily to southern Europe-could also be affected. The banking crisis could conceivably spread worldwide, just as it did in 2008. 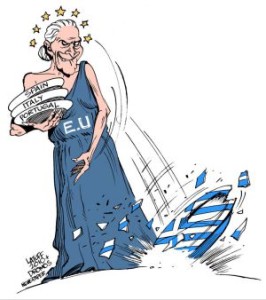 The length of time the market takes to recover should a no vote come in is in no way foreseeable. With the instability that the market has experienced over the last three months, it is more than likely to remain volatile for weeks perhaps months to come. It would take hard, concrete projections and actions to be placed immediately if not sooner to ensure investors that the appropriate financial decision was made. Also, that corrective measures have been well thought out in advance and in preparation of Greece’s rejection and apparently departure from the agreements.

Politics, overspending, and a failure to enforce the rules of conducting when utilizing money on loan has resulted in or possibly near catastrophic results for Greece. The remainder of the financial world will pick up the coins to replace what has been lost in a country unwilling to accept that they have been over their heads for far too long, and rode a cash cow economy straight into the ground with no way out but to try and repay another’s generosity in temporarily diverting the country’s financial crisis.

The European market is slipping and sliding straight down with a gentle hope that it may somehow recover and save face in the grace of Greece’s eviction.