US perspectives on US manufacturing tend to be rather pessimistic, which should come as no surprise considering some of the reverses that have happened in recent decades. US manufacturing started plummeting like a stone because of free trade agreements, which saw US manufacturers moving out of the US to countries with lower wages and looser labor regulations. Furthermore,reports made it look like this was how it would be for the foreseeable future because US manufacturing was dead rather than just depressed. Read about the US manufacturing facts here.

As it turns out, this might have been stretching the truth, not just a little but a lot. The statistics show that the output of US manufacturing has seen a sustained rise in output since the 1960s in spite of short-term falls throughout that period of time. Combined with the fact that US manufacturing has been producing more and more since 1985, it seems clear that it is not just alive but rather alive and well. The US manufacturing remains one of the most powerful examples of its kind in the whole world.

Although this sounds like a grandiose claim, it is supported by the statistics on what has been happening in more recent times. Since 2010, US manufacturing has added more than 500,000 jobs, which corresponds with its increasing value, its increasing output, as well as its increasing importance to the US as a whole.

Why Is the Current State of US Manufacturing The Way It Is? 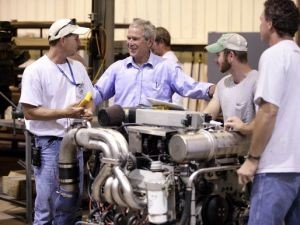 On the whole, US manufacturing remains powerful because the US remains a pleasing choice for manufacturers to base their operations in. First, this is because US oil prices have fallen, which has combined with rising wages in China and the surrounding regions to make US manufacturing less expensive in comparison. Second, US consumers remain important sources of income for manufacturers, meaning that those who choose to base their operations in the US can reduce their costs further by benefiting from shortened logistics chains. Finally, US labor has become increasingly productive, which is important for manufacturers who want to produce as much as possible while putting in as little as possible.

Unfortunately, this last factor is also responsible for the smaller number of US manufacturing jobs. Simply put, the productivity in US labor has risen so fast that it has outpaced the need for more labor to meet increased demand for production, meaning that there is less need for US manufacturers to hire more US labor.

What Is the Future of US Manufacturing?

Given that the current trends promise to persist for the foreseeable future, it seems probable that US manufacturing will remain alive and well. There are short-term crises that can threaten its short-term health, but it is important to remember that such crises are no more than that.