Earlier Yoga was more about chanting and meditation, but now there are various hybrid styles of Yoga, wherein elements of other workouts are fused together to shape different parts of your body like the waist, butts, legs, hands, etc. After acroyoga, aerial yoga, dancing yoga, etc., there is yet another form of hybrid yoga that is gaining many enthusiasts nowadays: “Laughter Yoga“. This yoga therapy was first started in the U.S. and is now practiced all over the world, promoted as a way to get relief from stress and depression. It allows adults to enjoy a hearty laughter for no reason!

The health benefits of laughter have been well documented (read about them here), for both maintaining health in healthy people and improving the health in the sick. There also exists the belief that voluntary laughter is just as beneficial as spontaneous laughter. Laughter yoga focuses in on reaping the physiological and psychological benefits of laughter, as the involuntary laughter in a group is contagious and becomes spontaneous laughter.

How Does It Work? 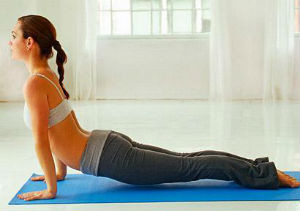 Laughter is stimulated in a group generally by eye contact, funny childish activities, and other laughter exercises. Attendants are generally made to stand in a group and do some playful activities to stimulate laughter. An example woud be standing in a lion pose with their tongue out, moving in circles while looking into each other’s eyes and making a sound of “ho ho hah hah”.

Suddenly, fake laughter changes into real and spontaneous laughter. In most cases, the laughter becomes contagious and spreads throughout the group. Laughter yoga is the only therapy wherein attendants enjoys hearty laughter without any stress in mind. A laughter yoga enthusiast does not need any reason or rely on any humor to laugh. Laughter is initiated by some childish, playful exercises and eye contact which soon changes into real laughter. Laughter yoga sessions start with some gentle warm up exercises like stretching, chanting, clapping, followed by playful activities that initiate laughter and end up with laughter meditation.

20-25 minutes of hybrid laughter yoga daily will help to make your immune system strong, relieve stress and depression, boost your stamina and self confidence, tone your facial muscles and will improve blood circulation in your body.