The movie “Inside and Out” deals with five psychological emotions humans experience. Dr.Dacher Keltner, a Berkley psychologist, and expert on the Scientifics of emotions, – was a consultant on the movie, in which these five emotions were portrayed: Fear, Disgust, Anger, Joy, and Sadness. The emotions took on the appearance of colorful characters interacting inside the brain of Riley an amazing little 11- year- old girl.

The movie is teaching people a valuable lesson about emotions in general, particularly their own, and how powerful they are. Emotions serve a purpose, and without them people often find themselves in an emotional turmoil. Emotions are expressed in various ways, depending on the cultural setting, expectation of others, and traditional upbringing.

A study conducted by Paul Ekman, Keltner’s mentor shows that humans portray up to seven emotions, regardless of their cultural differences. Filmmakers took five emotions from Ekman’s list and transformed them into colorful characters. Two emotions (contempt- surprise) were not included in the script, for the sake of simplicity. However, they may return in another sequel.

Inside Riley’s head, the different emotions are actually supporting each other, although they are separate entities. There is no one center or corporate headquarters. In fact, the concept of the movie, shows how the different parts of the brain come together to solve complex problems, which does not make sense. It is similar to problem solving or critical thinking.

The Chief Scientific Officer, Christopher Koch, from the Allen Brain Science Institute states that the inner emotions responses to situations are less complicated in reality, than they are on the screen. This is with the assumption that these particular emotions are readily visible, in which they often are not.

Koch, says that no one really knows who they are, and that people are really a stranger to their own inner emotions. He is quoted as saying, “We have all these emotions, but very often we have no idea why we have them.”

In life, people shift from one emotional state to another in a matter of seconds, depending on how they are feeling, or what they are experiencing. Researchers compare their perception of how kids, (particularly pre- teens, and early teens) handle a sudden decrease in happiness, or an anxiety attack to a world crashing down around them. This might sound traumatic, but the movie supports this scientific theory with facts. The movie shows the different shifts in emotions from tears to laughter.

The movie shows how this 11- year- old girl and her parents deal with the different emotional shifts. The movie 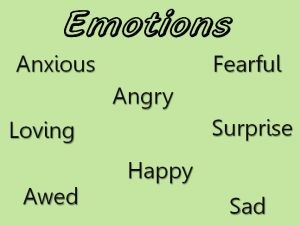 When people get a better understanding of their brain, and how it works, they can grasp the changes they are experiencing in their own lives, and embrace them.